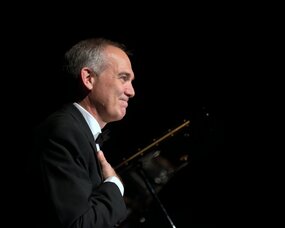 Khris Dodge is a versatile musician and accomplished educator who has devoted more than 30 years to the Tucson arts community. He is proficient on piano as well as all forms of percussion, has arranged hundreds (maybe thousands!) of charts ranging from single instrumentation to symphony orchestras, is a prolific composer of original pieces, and currently is the owner of Khris Dodge Entertainment and the Executive Director of the Tucson Jazz Festival.

Originally a pianist, Khris was lured to the percussion section early in his training and remained there through earning both a Bachelor and Masters of Percussion Performance from the University of Arizona under Gary Cook. While there, he reignited his interest in piano, thanks to his mentor Jeff Haskell, and pursued additional jazz and composition studies. He was also a part of the university’s burgeoning steel drum program and went on to direct the group during his undergraduate and graduate student tenure.

Khris has always maintained a busy performance schedule. From the end of his time at the University of Arizona, Khris was an on-call percussionist for the Tucson Symphony Orchestra. When he earned a permanent spot with the Arizona Opera, he made the move to that ensemble and spent 20 years in roles that included Principal Percussionist and Orchestra Manager.  During that time, he also built a successful private studio and began to venture into the landscape of musical theatre. In addition to playing in the pit for several touring Broadway productions, most notably:  Wicked (2011 and 2014), The Jersey Boys (2015 and 2017), The Little Mermaid, and The Book of Mormon (2016 and 2018), he has also served as Musical Director/Conductor for more than 50 professional mainstage and cabaret productions. Favorite shows include Always: Patsy Cline, Sibling Revelry (which starred Broadway legends Liz Callaway and Ann Hampton Callaway), Songs for a New World, 25th Annual Putnam County Spelling Bee, Sweeney Todd, and Forever Plaid, among others.

These experiences eventually led him to the fast-growing world of staged concert productions and to the formation of his own company, Khris Dodge Entertainment. He has created and arranged dozens of shows in this field for almost 10 years.  Shows range from tribute format shows such as To Ella, With Love, The Tapestry Album: The Music of Carole King and Still Crazy after All These Years: A Tribute to Paul Simon to all-out blockbusters such as Big Top Broadway, Classics Rock, and In the Christmas Mood. Khris Dodge Entertainment has taken shows around the United States and has collaborated with performers such as TV/Broadway star Paige Davis and Swedish jazz superstar/frequent PostModern Jukebox guest Gunhild Carling and International soloist and Grammy award winner, Terry Barber.

Khris’ busy performance schedule has led him to performances at Manhattan’s Metropolitan Room as well as other NYC locations, with the Susanville Symphony in Northern California and the Louisiana Philharmonic Orchestra in New Orleans, in Sedona for the International Sedona Film Festival, as well as multiple times with the Austin Cabaret Theater.   Most recently, Khris arranged and conducted Hot Stuff: A Symphonic Tribute to Donna Summer as well as arranging another complete program for soloist, Crystal Stark with the Sierra Vista Symphony.