The Cowboys Overture..........John Williams
Gift from Joe and Frances Bettinger 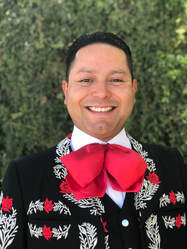 Justin Enríquez
Justin Enríquez was born and raised in Tucson, Arizona and is a proud graduate of Tucson High Magnet School (THMS). He has a B.A. in Mexican-American Studies from the University of Arizona with a focus on ethnomusicology from the College of Social and Behavioral Sciences.  He is currently in his 8th year as director of Mariachi Rayos del Sol de Tucson High and for four years he served as Department Chair of the Fine & Performing Arts at THMS.

Justin has had the unique opportunity of being a member of the program he is now director of and attributes his current success to the formative years he spent as a member of the Tucson Arizona Boys Chorus from 1990-1997 under the directorship of Dr. Julian Ackerley.  He has been in mariachi education for over 17 years, having started in the Mesa Unified School District, and continuing in places like Salpointe Catholic High School and various community youth mariachi groups in Tucson.  He currently sits on the Board of Directors of the Tucson International Mariachi Conference (TIMC) and is an active member of Mariachi Sonido de México.

As a performing artist, Justin has recently had the privilege of sharing the stage with professional artists such as Los Tigres del Norte, Lupita Infante, Beatriz Adriana, and has traveled extensively to Spain, France, Italy, Mexico and throughout the United States.  He is extremely humbled to be performing with the Tucson Pops Orchestra under the directorship of Conductor Khris Dodge. 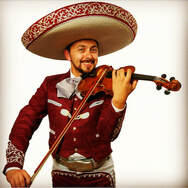 Alberto Ranjel, III
Alberto Ranjel, III has been a pillar of the mariachi community for nearly his entire life. Known for his dynamic stage presence, vocal prowess, and violin precision, he is also a respected arranger, composer and educator. Even in his teens, he was already sharing the stage with the best of the best: Adalberto Gallegos, Mariachi Cobre and Mariachi Los Camperos, to name a few. In the past decade, Alberto has dedicated himself to the training of young mariachis, becoming a champion of the art form that many gravitate to for his knowledge, experience, and insight.
​
He has long served as the musical director of El Mariachi Tapatio de Tucson, where he has been a member for sixteen years. Alberto has overseen performances not only across the United States and Mexico, but organized tours in Japan, Italy and Austria, bringing the art form to dozens of cultures and peoples for the first time. A true ambassador of music, Alberto also arranged pieces for Mariachi Tapatio to perform with the Sons of Orpheus, one of Tucson’s prominent men’s choirs The resulting concerts were a truly unique and beautiful union of classical and folk music, praised by fans of both genres.

His greatest contributions to education occurred from 2008 to 2014. As a faculty member at Tucson High Magnet School, he was the director of Mariachi Ariztlan de Tucson High, and also taught music theory, guitar and choir.

Alberto’s musical achievements extend beyond the mariachi world, giving his technique and performances a one-of-a-kind perspective. He earned his Bachelor of Music degree in vocal performance from the University of Arizona in 2005, a top student of world-renowned tenor Grayson Hirst. A tireless performer, he appeared in productions of many operas, such as “La Rondine,” “The Student Prince,” “The Merry Wives of Windsor,” and “The Medium.” Wanting to improve his teaching skills, he went on to earn Secondary Teaching Certification in Music and English for the State of Arizona in 2008, and then a Master of Education Leadership degree from Northern Arizona University in 2012.