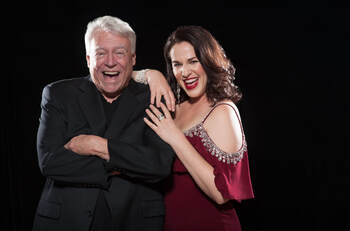 Katherine Byrnes
Katherine Byrnes is so very excited to be a part of Khris Dodge’s first Tucson Pops Orchestra season! Katherine is an award-winning vocalist, director and concert producer based in Tucson, AZ. She is the sell-out headliner of KDE’s "Tapestry: The Album", a show honoring Carole King, and "Piece Of My Heart", her tribute to Janis Joplin. Katherine has toured China as the lead vocalist for Art.if.act Dance Project's "Great American Dance Tour", and all across Europe and the US as a harmony singer with Blue Note recording artist Amos Lee.

When in Tucson, Katherine is the co-director and choreographer of the Gaslight Theatre, and music director of the Gaslight Music Hall. Known for her dynamic range and lyrical connection, Katherine has been a featured soloist with acts as diverse as the Tucson Symphony Orchestra, International cumbia mambo sensation Orkesta Mendoza, and Arizona legends Calexico.
Jeff Haskell
Jeff Haskell received a B.A. in Music Education from West Chester University (PA) and a Masters in Theory from the University of Arizona. While studying for a Doctorate of Musical Arts in Composition from the University of Arizona, he served as the second Director of the Tucson Boys Chorus, which continues to perform extensively in the U.S. and abroad.

He began his jazz career as a scat-singing boy soprano in Philadelphia. At age 12, he sang and played saxophone professionally, adding the organ a year later. Soon thereafter, Haskell immersed himself in jazz studies with pianist Ray Smythe and organist Jackie Davis, and at age 16, was jamming with saxophonist Lew Tabackin. The first winner of the first American Collegiate jazz festival (Villanova), Haskell soon went on to play in Europe with flute great Jeremy Steig and trumpet legend Chet Baker. Haskell has won three Los Angeles Emmy Awards for his work on the much celebrated children’s TV program, “Dusty’s Treehouse”, and critics praised his theme and underscore for the “IT Show” for ABC, for which he received a Los Angeles Emmy nomination. Some of his recent Hollywood music includes arrangements on two Linda Ronstadt albums, cues for “Dudley Do-Right” and “Fight Club”. “Pastiche Americana”, a composition written for chorus and orchestra, was performed by The Little Orchestra in Lincoln Center. His “Concerto for Jazz Band and Orchestra” debuted with the Tucson Symphony Orchestra. And he conducted the world premiere of Billy Taylor’s suite for jazz trio and big band, “Fiesta In Tucson”.

A veteran of hundreds of “jingles”, he has orchestrated an album for UP WITH PEOPLE!, has recorded a legendary synthesizer album for Capitol Records, and has served as music director, arranger and conductor for country music legend Buck Owens, with whom he recently completed an album with the Bakersfield Symphony. He is co-founder and musical director of the Tucson Jazz Orchestra and a senior faculty member in the School of Music & Dance at the University of Arizona. 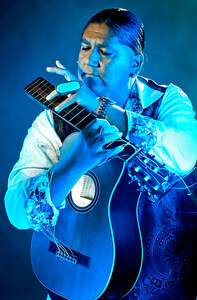 Gabriel Ayala
Gabriel Ayala’s work takes many forms, ranging from music to painting to his latest: wearable art.
Gabriel Ayala is a composer and classical guitarist, performing music across several genres including classical, jazz, and Ayala’s signature “jazz – menco.” Ayala is pleased to share his newest healing works, composed during the pandemic quarantine, with his international audience.

A member of the Yaqui people of Southern Arizona, Ayala performs regularly throughout the United States and has appeared at the John F. Kennedy Center for the Performing Arts, National Museum for the American Indian, ASU Kerr Cultural Center, and Oscar Meyer Theater in Madison, Wisconsin. Gabriel is nationally recognized, and he was the featured performer at the “Festival Internacional de la Guitarra Academica” in Venezuela with performances in Caracas, Guarenas, Guatire and National  Public Television throughout Venezuela.

Gabriel has been breaking stereotypes amongst Native and Non-Native people by performing classical music, jazz, flamenco, and new compositions of his own. In 2009, Gabriel was nominated and performed in the Indian Summer Music Awards, Native American Music Awards, Aboriginal People Choice Awards, and the Canadian Aboriginal Music Awards. He led the Native American Music Awards (NAMMY‘s) with the most nominations and received Best Instrumental CD for “Tango!” Gabriel believes in leading our children in the right direction through his philosophy, “Honor your elders, love your children, and respect your women.“